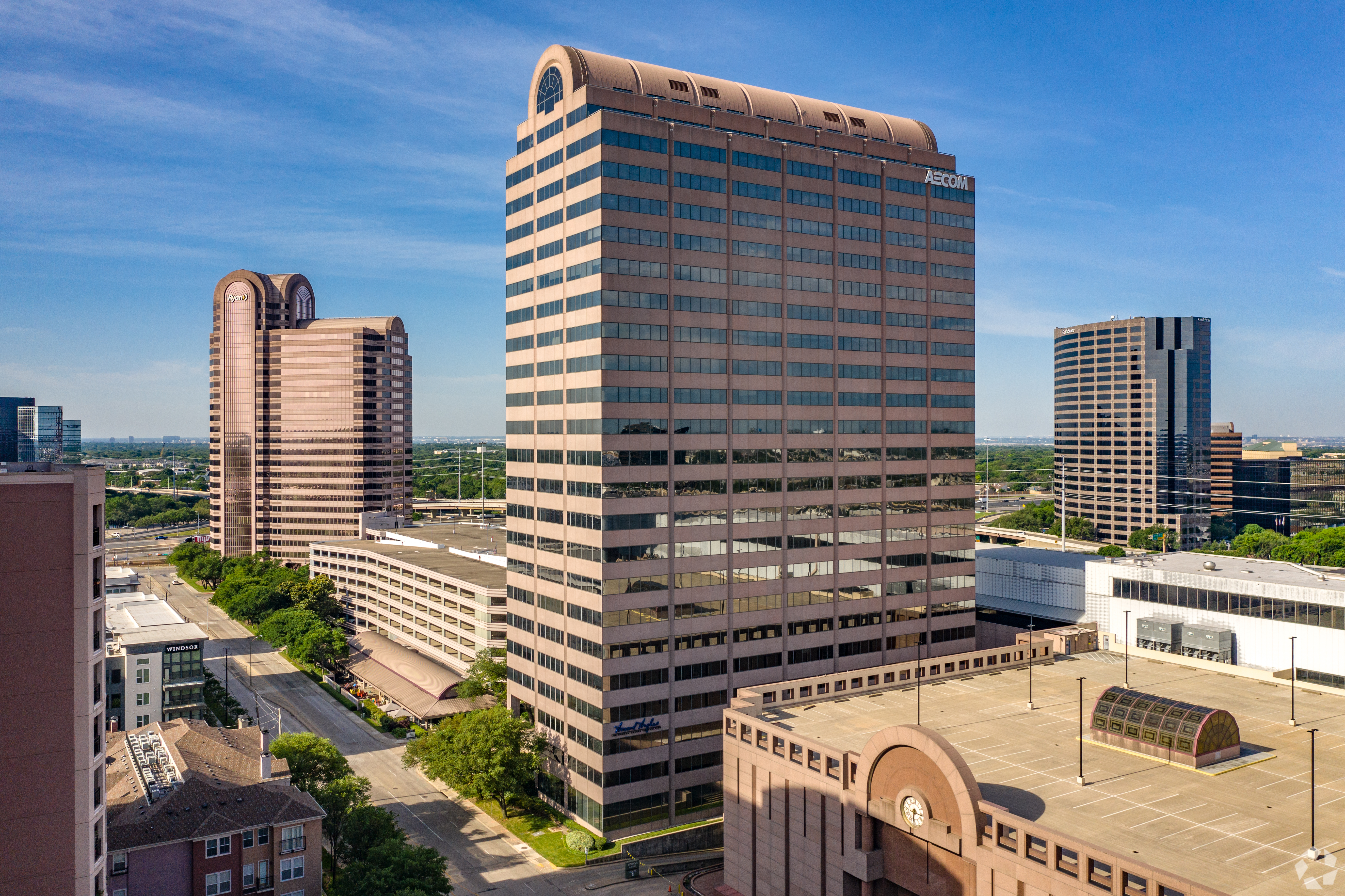 AECOM is moving its headquarters to Dallas to the One Galleria Tower office building. (CoStar)

Global consultancy giant AECOM is joining the wave of Fortune 500 companies relocating their headquarters to Texas from California, a state with lower taxes and business-related costs.

The construction, design and engineering firm plans to move its corporate headquarters to its existing Dallas office from Los Angeles, effective Oct. 1, with CEO Troy Rudd and other corporate leaders based in Dallas. The company cited the benefits of North Texas as a corporate hub and a relatively high concentration of experienced job candidates in the engineering and consulting industry as reasons behind the move.

AECOM has at least 1,200 employees in the Dallas-Fort Worth area, plus offices in the Houston, Austin and San Antonio areas. The firm’s existing Dallas office is in the city’s Galleria Towers complex at One Galleria Tower at 13355 Noel Road, Suite 400, a building that counts online retailer Amazon as its largest office tenant, CoStar data shows. The firm still expects to maintain a large presence in California, where it has about 2,500 employees at its downtown Los Angeles office and other offices throughout the state, the company said.

Other major employers that have relocated from California to the Dallas area in recent years include financial services firm Charles Schwab, automaker Toyota North America, pharma company McKesson Corp. and engineering firm Jacobs. And Fortune 500 companies that have relocated to other Texas cities from California during the pandemic include Oracle Corp., which moved to Austin, and Hewlett Packard Enterprise, which moved to Houston.

AECOM’s planned cross-country move comes a little less than a year after it announced plans to relocate its headquarters within the Los Angeles area, moving from the Century City business district at 1999 Avenue of the Stars to consolidate its employees at 300 S. Grand Ave. in downtown Los Angeles where its lease expires in 2032, according to CoStar data. It wasn’t clear why AECOM decided to move its headquarters again only eight months later.

AECOM did not disclose whether employees would be required to relocate or its future office plans in Texas or California. The company did not immediately respond to requests for more information.

The move is “a shot in the arm for the office market” in Dallas, which has been “impacted by widespread disruption from the pandemic,” said Bill Kitchens, CoStar’s senior market analyst for Dallas-Fort Worth. Even so, with office demand down in parts of the country because of the pandemic, “the region will continue to be competitive for attracting companies seeking to relocate or expand and, as a result, remain on the leaderboard for net-migration and job growth; that’s a structural advantage before the pandemic and will persist post-pandemic.”

Greater Dallas-Fort Worth added the most people of any metropolitan area in the country over the past decade. The area gained 1.27 million residents between 2010 and 2020, growing its population 20% to 7.63 million, according to Census Bureau data released this month.

California has increasingly become more expensive for businesses and residents, making Texas and its lack of a state income tax and cheaper business costs more appealing. Texas also allows companies that relocate to the state to deduct relocation and moving expenses from their taxes.

AECOM is working on large infrastructure projects in Texas, including an environmental assessment and preliminary engineering services for a 2.1-mile extension of the $1 billion, 27-mile TexRail line that connects Fort Worth with Dallas-Fort Worth International Airport.

AECOM has also been involved with planning for the proposed hyperloop, a 640-mile route expected to connect the major logistical hubs of DFW Airport, Port Houston and the Laredo Inland Port along with 18 million people across five major cities, according to the company.

A joint venture between AECOM and HDR has been working on a $72 million portion of the U.S. Army Corps of Engineers’ ambitious, multibillion-dollar seawall system proposed to strengthen the resiliency of the Texas coast.

The engineering firm would also be landing in Texas at a time when the state could be poised for a pile of cash from President Biden’s proposed $1 trillion infrastructure plan currently under debate in Congress. Because Texas accounts for about 8% of the U.S. population and 10% of the country’s gross domestic product, analysts say the state could be eligible for millions of dollars in aid to shore up its electric grid, expand broadband internet to rural communities and strengthen fragile coastlines from the threat of hurricanes.

THE CEO OF REAL ESTATE

With over $1 billion in property transactions since 1999, P.A.M.S. has managed approximately 25,000 units of individually owned investment properties, as well as syndicated properties.
Currently, P.A.M.S. oversees hundreds of properties across the greater DFW area and throughout Texas. P.A.M.S. has established a sound reputation for exceptional service in the home buying/selling market, expert market research & analysis, help in increasing property values, rental of new projects and old, control of expenses, and rehabilitating existing properties.
The company has managed all types of real estate and has detailed experience with receiverships and REO’s.